I ran a lot of kilometers in 2016.  5900+ to be less exact.  In early December, after looking around for a new shoe to try out, I landed on Hoka One One as a brand that came recommended by many ultra distance and trail runners as they were extremely comfortable and forgiving in long efforts.  Given my high mileage, I thought I would see what the fuss was about.

I decided on the Tracer model, which is less “Hoka-ish” than many of their models, given their less maximal cushioning (Hoka’s are known for their extreme amounts of cushioning, sometimes looking platform shoe esqe).  Having now put more than 150km in the model, I am happy to share what I have learned.

The Tracer model bills itself as “a lightweight training shoe with superb racing potential“.  Indeed, the weight of the shoe comes in around 7 – 7.5 ounces which is the weightier end of a racing flat.  With a 4mm heel to toe offset (heel drop) (I have seen reviews saying they are anywhere from 2-5mm, but we will go with 4), this shoe favours more efficient runners.

Sizing: I found the shoe true to size.  I wear a size 10 in all running shoes, and this was no exception.  Some reviews have suggested a slim/narrow forefoot, but I did not find that to be the case.  I put the shoes on and they felt great.  Like a nice slipper. Unbelievably great.  I was excited to run in them (still am!). I can notice some pressure on my baby toe, but the shoe is flexible and I have had no chafing or blistering issues, even with running in rain, freezing rain and snow with them, at extreme distances.

Ride: Different from other Hoka’s (I now have a couple of pairs as a recent convert) these are not super cushioned.  Having said that, compared to some of my other past shoes in the 7ounce/racing flat range, these are exceptional in terms of cushion.  But the shoe is super responsive, snappy, fast.  These shoes get me up on my mid-foot/forefoot and moving quickly.  I have used them for a few tempo runs with good success.  While for some, these may not favour long distances, I did run a 25mile/40km effort with them, in the rain, with some up-tempo work and had no issues with soreness or unusual fatigue the next day (not more than usual!)  I could see using these for a marathon, or certainly a 1/2marathon as an alternative for those worried about the support of a racing flat.

Wear and Tear: After 150+km, these look brand new.  Very little wear on the outsole, cushioning is still intact and no wearmarks or issues on the upper.  Will be interested to see how long they last.

Price: I find shoes getting more expensive.  at ~$150, there are less expensive models on the market, as well as more expensive ones.  So far, given the wear/tear, I feel like I am getting good value for the price.

I would recommend these shoes to someone seeking a fast, lightweight shoe to go fast in, but also provide enough support (in fact, disproportionate support, meaning more, than the weight of the shoe).  Also, a good alternative for people looking for something to race in, almost at any distance up to and including the marathon. 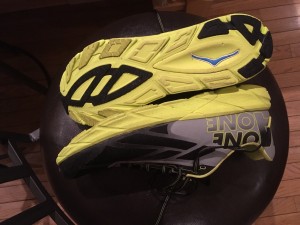 View all posts by Jamie Marcellus →