This race is organized on challenging terrain with lots of climbing with control checkpoints at hard to reach locations. The venue for the April 15th race was the Ball’s Falls Conservation Area in the Jordan area of the Niagara Escarpment region. This race is advertised as having lots of technical trail running including steep cliffs, rocky ground, and large creeks. As it turned out with the rainy forecast a lot of mud as well that made for tricky footing.

Before the start, each racer got four 1:10000 scale maps showing places in the Niagara Escarpment – Bruce Trail system where the orienteering flags or controls (CPs) were located. An electronic SportIdent (SI) timing chip puncher is used to record each control visit. The map has a contour interval of 5m and at first glance (and maybe second glance!) looks confusing and jumbled. Being able to decipher map symbols and count contour lines either for ascent or decent to judge severity of elevation change helps you a lot. Once we got the maps we knew this would be a mostly linear race going west from Short Hills Provincial Park and ending at Ball’s Falls Conservation Area.

The course is very much a ‘Choose Your Adventure Run’ format where participants have five hours to get all the sixteen mandatory checkpoints and score as many points as possible on the bonus challenge sections. The order and difficulty of the bonus checkpoints you visit is up to you.

Controls are rated by difficulty depending on the running and navigation skills needed to find the checkpoint. Along with the mandatory checkpoints blue is easier, black diamonds are considered difficult and double black diamonds the hardest.

This was entire race route from Short Hills (green dot) going west following the Bruce Trail a majority of the time. (My GPS battery gave out as we entered Ball’s Falls) 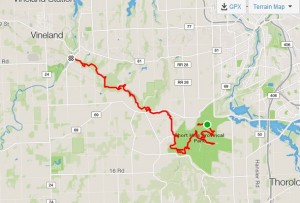 I did this race with my Burly Trail Runner friends Jenn and Gemma and I was to lead the navigation. We arrived early to prep the maps, but research of the Short Hills area would have helped. Not falling into the trap of following other people on the course and the endless muddy Bruce Trail ended up being pitfalls for our race.

Equipment Needed:
Trail Running Shoes
Long-sleeves and racing pants. You would be bushwhacking.
Watch to ensure that you return within the five-hour time limit
Whistle and Cell Phone in case you run into trouble
Compass. Useful for quickly finding which direction is north and taking map bearings.
Small First Aid Kit
Hydration
Pen/Marker to mark a route and make notes on the map
Running pack. Used my Duthie 10L I use usually for short to medium length runs and bike rides. 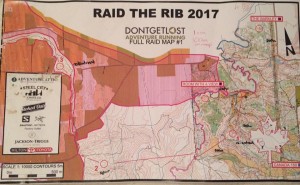 There was a mass start on the field at the Scout Camp at Short Hills. We decided to ignore the ‘Barkley’ challenge and go west first and do ‘Room With a View’ a moved checkpoint. After that run southeast and do ‘Canada 150’ and get the five easier punches there (A B C D E) then run west again to get the first mandatory checkpoint 1 punch. 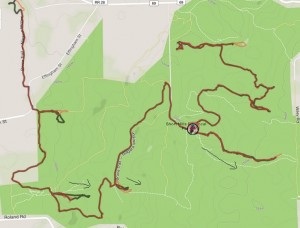 Then the real fun started.

We ended running the wrong direction on the Bruce Trail (east) and over a hour trying to find the mandatory checkpoint 2 punch. Strava tracking showed exactly where we went wrong. I fell into the trap of trusting another team’s sense of direction and that is a big mistake when navigating usually. 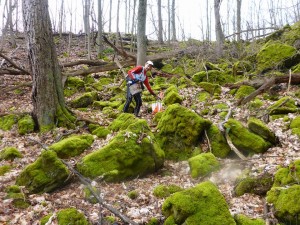 Trying to put that disaster behind we continued onward to Rockway Falls on the Bruce Trail. Light rain falling at this point and way more problems now with mud and starting to slip and fall. Watching the time, the ‘Slope Style’ and ‘E=MC2’ bonus sections in Rockway Conservation Area were skipped. 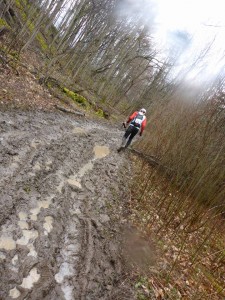 This race is very much a linear trail run going west and the massive mud issues on the Bruce continued. Hard to reach many mandatory checkpoints and a huge need to be careful on the trails. Especially since we were so far behind it becomes not worth it to push really hard and injure yourself. Just have fun. We skipped more bonus sections labelled ‘Laneway to Louth’, ‘Bermuda Triangle’ and ‘Dogbones’ because of the time limit to finish under five hours. 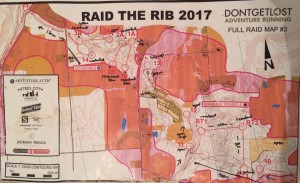 This was Map 3 of the race and you see how things were marked in advance to help with the navigation. The checkpoint 14 waterfall punch as mentioned by race folks was nice to get to. At this point I was thinking how to reach the finish under the 5 hour cut-off at Ball’s Falls at this point knowing it would be close by just getting the mandatory checkpoints only. We didn’t finish in time and were over time a bit despite running it hard near the end of the course. 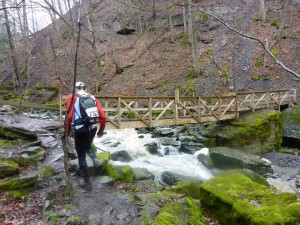 The nice bonus of this race is the awesome scenery of the Bruce Trail. This is the trail bridge near Rockway Falls.

A fun five hours for sure and a great workout climbing and descending all the peaks and ridges!

More Info:
More about the sport of orienteering – https://en.wikipedia.org/wiki/Orienteering

A video recap of this race was also made by Get Out There Magazine. View it here: https://www.youtube.com/watch?v=cJ2YLSYEjlA