To date, it is the best event I’ve ever been in.

Someone told me “You will always race better at a destination race.”

Oddly enough, I found racing in 35+ degree heat and 99.9% humidity led to a slightly slower race than here at home.  But that was just my experience.

I was lucky enough to get a slot in the Philippines 70.3 Ironman in Cebu.  But this isn’t just any 70.3.  In past years, (including last year, 2016), this was the Asian-Pacific Championship as well.   This year, included a Pro division as well as Asian Elite division.

The 2500 slots sold out in 4 hours.  So being at my PC at the time registration opened was a bonus.

Corrals appear to be arbitrary!  I had spoken with another racer who advised there were a lot of competitors, who were not great swimmers.  He suggested lining up in the 1st or (latest) 2nd wave.  When lining up in the corral, I was surprised by the number of white swim caps in the first corral.  A white cap advises the lifeguards that they are not strong swimmers.  While I am not overly fast swimmer, it was obvious there were going to be a few buoys in the way.  So I did work my way up to the end of the first wave, and it was a good idea.

The swim was a 1.9km “T” shape starting from the shore in the open ocean.  Although there were a lot of swimmers in the water, it wasn’t so crowded that it was a mess.  They released about 6 racers every 5 seconds, so it spread us out and kept everyone just a little safer at the start line.  There were moments where you had to work between or around other swimmers, but most other racers were respectful.

And although there were a lot of swimmers, the real challenge was the unpredictable water itself.  3-4 days before the race, Poseidon and King Triton must have been having a disagreement, because it was wavy!  3’ high waves were rolling in.  To get experience of it, just in case race day had these conditions, I went out for swim in it.  It is tough!!!  However, and thank goodness, the waters calmed and it was pretty flat.  The one thing I didn’t think of was the one thing you can’t see; The current.  There were no major waves, but the water was still moving against you for half the swim.  This caused my swim to be 10 minutes longer than it had been in the Muskoka 70.3, 3 weeks earlier.

The highlight of the swim was being able to look down, in the clear water, and see all the coral on the ocean floor.  Whenever things were starting to feel like a strain, you could take a moment, look down and just feel better about the whole thing. 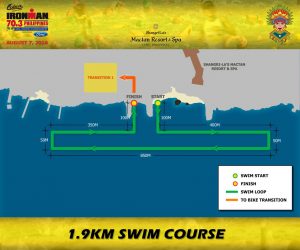 You traveled over the massive and impressive Marcelo Fernan Bridge, through the city, then along the ocean-side with amazing views of the ships, then through an underground tunnel.  Gatorade and water stations were plentiful and the spectators were cheering and even asking for the water bottles as souvenirs.

Although blistering hot, being on a bike made for a slight breeze.

And spray on sunscreen is a blessing!  The lesson I learned the hard way… don’t forget to spray the back of your neck!! 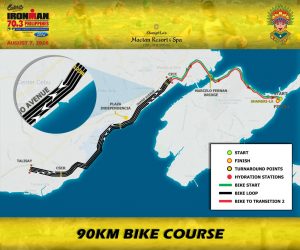 This was, hands down, the toughest leg for me.  It was a two loop stretch to the end of the island and back.  My transitions from bike to run aren’t great to begin with.  When trying to get off the bike and run, everything from the bellybutton down decided to tighten up and resist.  It was 35 degrees in the shade, when there was shade.  No breeze. And 99% humidity in the air.  After about 5 km in, I accepted the fact that my objective wasn’t going to be a specific time or even the finish line.  My objective was simply to get to the next water station!  And it wasn’t just the water and Gatorade I wanted, it was the scoop of cold water the volunteers would dump over your head that I needed.  It was cold water, as they were keeping ice in it. And it was needed.  As I was running along I’d go into a haze and just going through the motions.  Then the scoop would come, and the clarity would return to your eyes.  An awakening of sorts. 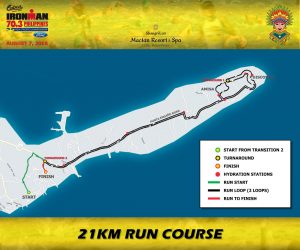 Just like the course, the finish line was spectator filled.  Seeing my wife and kids at the entrance to the finish chute which was the final boost I needed.  Unfortunately a bunch of people decided to stop together on the finish line and pose, which caused the rest of us to pile up and miss out on our finish line picture.  But I’ll take the scoreboard as my finish line photo.  I came in, sandwiched between two relay teams.  My individual time beat both relay teams, one team by 1min 10 sec, the other team by 9 minutes, 10 seconds. 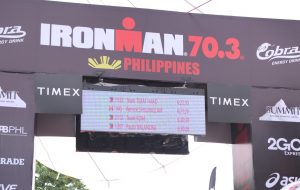 As the Ironman 70.3 races are generally the same price (in the local currency), regardless of location, the fee for the Philippines 70.3 was in US dollars.  And US dollars go further in the Philippines.  So it is no surprise this race seemed to be a little more extravagant.

The swag bag was pretty great.  Got a few shirts, a great backpack (which even has a separate slot for shoes), water bottles, samples… The finishers’ medal was beautiful, 3D style.  Finishers’ beach towel…. Food… drinks… outdoor buffet…  *sigh*.

In summary, if you ever get the opportunity to do a destination race, do it.  When you plan your next holiday, do a search online to see if there are any races taking place.  You never know what the experience will be like until you do it. 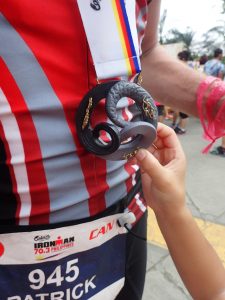 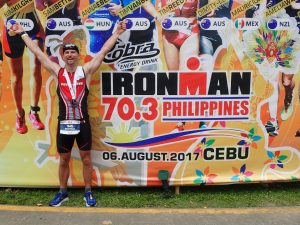