In March I had the opportunity to travel to Nagua, a city on the northern coast of Dominican Republic, to volunteer at Seminario Evangélico Teológico del Caribe, which is operated by a non-government organization called Every Day Ministries. At the end of the week, a local community group was holding the city’s second ever 5km road race, the Nagua Corre 5km, and I knew I had to take part. Nagua is a bustling small city/big town, off the tourist track, but yet beautiful in its own way with its coastal views and quaint buildings. As such, the race, put on by and largely attended by locals, was a fascinating glimpse into the Dominican running scene and the community spirit of Nagua. Every Day Ministries was also hosting a team of teenager volunteers from Brampton, so as a group we all dedicated ourselves to representing this local organization in the race. 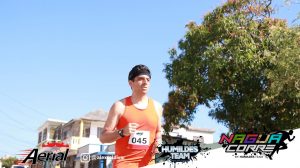 Racing in the blazing sun

Race morning arrived sunny and very hot and humid. Though I’d been visiting Puerto Rico and Dominican Republic for more than a week already, I still felt sapped from the blazing sun as I stretched and got ready for the race. The start/finish line was located in a park right in the heart of Nagua, and a DJ was playing loud merengue, dembow and reggaeton music as throngs of locals began arriving at the race. I couldn’t help but notice that the vast majority of the runners were wearing the cotton race tshirt given to us as registration, and I began to feel conspicuous wearing my technical tank top! The race seemed to have all of the marks of a well-organized run: refreshments (water and electrolytes) tables were already present at the start/finish line, the music was pumping, and a nice starting arch was erected. The atmosphere was electric, especially as a local Zumba group led hundreds of participants in a loud, high intensity warm-up. I didn’t participate, having my own warm-up routine, but also recognizing that the heat was already causing my heart to work hard before the race even began! Soon the masses lined up really tightly to start the race, and the gun went off! 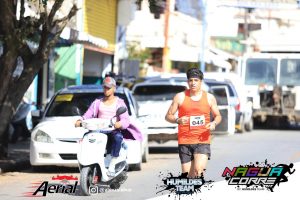 Like many 5km road races, as soon as the race started, hordes of children and teenagers began sprinting right by me, cutting me off on the early 90 degree turn! I couldn’t help but laugh, though, as they were so full of joy and were clearly having a fantastic time as we ran through the streets of downtown Nagua. I noticed pretty quickly that the children and teenagers soon began to tire from their early race heroics, and by the time we finished an especially scenic portion of the run alongside the gorgeous ocean coast, I found myself among the top 5 runners in the field. We turned away from the ocean and back into the dense and slightly hilly streets of Nagua, passing by people’s homes and shops just beginning to open. The crowd support during the race was wonderful, as local people were on the streets cheering us on as we ran. They especially liked it when I responded back in Spanish! There were some interesting quirks in this race: for instance, full bottles of water were handed out at the plentiful aid stations along the course (I’ve seen this running a big city race in Lithuania, and, actually, in a smaller race in Ottawa this very summer! But, it struck me again as something you don’t see too often). I was grateful for the large amount of water that I could pour on my head, as the heat was oppressive and unrelenting!! Also, the course marshalls consisted of young people riding on scooters and motorcycles telling runners where to go. The course was clear and usually marked well, but there was one turn in the final km that I missed, and by the time I realized my error and returned to the course. I probably lost 15 seconds or so. 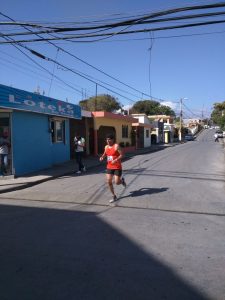 Late in the race!

I had such a fun time seeing the city of Nagua as I ran, but I felt very heavy, no doubt due to the lack of acclimatization. In fact, I feel like I really ran at more of a 10km pace effort, which was the most I could muster in the humidity and heat. Still, even with the heat and my one wrong turn, I was able negative split the race to come 2cd overall out of 350-400 joyful runners, in a slow-for-me time of 20:34. Some of the Canadian runners from Every Day Ministries also had fantastic races, including top 10 performances, and another amazing highlight for me was cheering on a local friend who’d overcome much physical adversity in her life to finish the race strong! 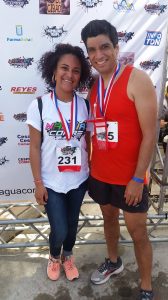 My local friend, Yen, overcoming adversity in the race!

The post-race festivities were also wonderful, with prizes for categories like “Oldest Finisher” (a couple in their 70’s shared the award) and “Fastest Pregnant Woman”, along with awards for the top male and female runners. Coming in second place (first place was a strong Dominican runner from another part of the country), I was even honoured to give a little impromptu speech in my rusty Spanish to the crowd still lingering at the finish. I expressed my gratitude to the excellent race organizers, as well as the wonderful people of Nagua for their support on their hot, beautiful streets…a fitting end to a unique and amazing running experience! Post race, Nagua Corre organizers revealed a professional quality highlight video of the race, complete with drone footage, showing the wonderful community spirit of Nagua (the race also posted nice free professional pics from various points in the race, another great perk!). Overall a fun race that I’d not hesitate to run again! “Gracias a ustedes, la gente de Nagua, y a el equipo de Nagua Corre 5km, por esta experiencia muy bella! Dios les bendigan ustedes!” 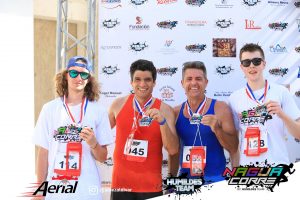 Some of the Canadians who placed high in the race 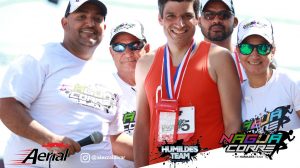 Accepting my award for 2cd place