I love GU so I was over the moon when I learned that I won the lottery and can get some of their products as part of their generous sponsorship.

I use the GU Roctane gels for any races longer than a 10k run. Half-marathons, marathons, half Ironman and Ironman races. I only use the gels on the run because I find that they are very sweet and I couldn’t stomach them if I used them on the bike and the run. I try to eat solid food on the bike including GU chews.

My favourite flavour is the Cherry Lime and I’m glad that Running Free carries that flavour. 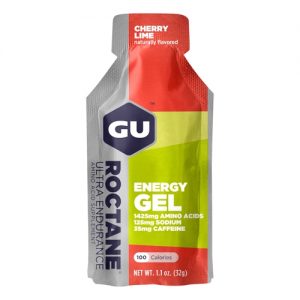 When I can’t find the Cherry Lime in store, I usually go for the Blueberry Pomegranate. I find that these two flavours are the least sweet and when you need to consume 8-10 of them within 4 hours, after a while you will want something less sweet. The Chocolate Coconut is absolutely delicious, but it is very sweet, so maybe I will take one early in the run, but can’t stand it later. I like the Vanilla Orange and the Tutti Frutti flavours as well, so when I want to change it up a little bit, I use one of those.

I wish they had the Nude flavour, which is basically no flavour, in the Roctane version. They have it as a non-Roctane but I find that the extra amino acids and sodium that the Roctane has gives me an edge so I prefer the Roctane and also I only take the caffeinated versions. My thinking is, that if caffeine gives you an edge, why would I take a gel without.

On a longer race (marathon or Ironman) I might take 3-5 of the Cherry Lime and then one each of the other 3-4 flavours.

I must admit, it is not always easy on the stomach. But when I manage to get myself to the race the way I should with all the pre-race routines nailed, I usually don’t have a problem.

When you train for a long endurance event, you should always try your nutrition in training. So I train with my GU gels too. You need the energy during a long run in training as well, so it is not just to nail your race-day nutrition but also to make your training better.

If you are just getting into endurance events, GU is a go-to. Try both the Roctane and the regular versions and see which one works better for you. I would only look at other gels as options if you tried GU and for some reason it is not the one for you.

View all posts by Viktoria Brown →