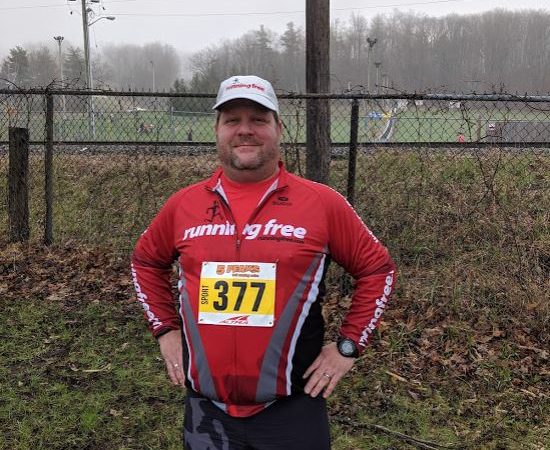 I signed up for the 5Peaks series this year in a bid to put some races on the calendar to motivate me to get back into running shape.

The series has 2 or 3 distances Sport, Enduro and (sometimes) Half.  I signed up for the Sport with the intention of not killing myself on the road to longer runs and races.

5Peaks has a pretty flashy online presence and my perception was that they are well run with great swag.

I encouraged a buddy who is a new runner to challenge the series with me and looked forward to him waiting for me at the forthcoming finish lines.

Kelso being a little ski hill in Milton provided the first of the 5 ‘Peaks’ I was going to enjoy this year.

The morning was cold and wet.  Getting to the race was easy and parking was plentiful.

Sponsors had a number of tents set up so their people could reluctantly huddle in the cold with their hands in their pockets.

The indoor reception for bib, race swag and additional race series swag lines was big enough to house about 80% of the people squeezed in there in a series of twisting lines.  No fault of the organizers, it’s the only building there and the weather sucked so people piled in.

The pre-race email had lots of information and was extremely helpful answers any question I might have.

First thing I loved about the race is that it started in 6 waves.  Eric the MC provided plenty of tips and info while helping to remind everyone to find the wave that worked for them.  There is nothing worse in trail races than be either stuck behind a group of people on single track or having someone breathing down your neck while you are trying not to wipe out.

The Enduro and Sport also had different start times so it lessened the size of each wave again.

My buddy and I started in wave 5.  They set the starting waves by best 5k time on the road.  This was a very logical way to do it.  I am nowhere near my top running shape so starting where I did made sense.

Out of the gate the well marked trail lead across the bottom of the ski hill for maybe 500 meters.  It gave some additional room for people feeling eager to get out in front.

It then started the big climb.  In a way I like having the climb out of the way at the start but that was no consolation when tackling over 1km of climb up the ski hill.  I huffed and puffed as my running partner slowly disappeared ahead of me.

Once up to the top the path narrowed from what was like a service road for the groomers into some fun single track trail.  There were several ‘lookout point’ locations where I am sure a wonderful view was possible on another day but the fog was strong so visibility seemed like a few meters.

The recent rain provided a few ‘shoe sucking’ mud pits to power through.  All participants in and around me seemed pretty happy given the chilly, muddy day.  The rocky and rooty climbs were wet and slick and keeping our focus on staying upright.

The trail was well marked, well signed and water tables were well placed where they were supposed to be.  The volunteers were very smiley and cheerful!

The final decent back to the finish was exciting!  The rain had started adding to the slick conditions and temptation to make up a little time was tempered with treacherous cut backs down the hill.

The return to the final shoot was back to the open area at the bottom of the hill.  Runners were rewarded at the end of the race with a final little hill to climb!

As far as my race is concerned, I feel pretty good about it. With not knowing what to expect I was hoping for sub 60 minutes. My fitness isn’t where I wanted it to be. I worked hard … i’ll take it. It pains me at times because I recognized great opportunities to make up some time during the race but I didn’t have it …

I had the impression this series had great swag.  We had signed up for the full series so got a pretty great hoodie that was a $60 value.  I really like it.  The race swag however was some sort of head-band thingy.  It may suit some of the runners and it looked kind of cool on some people but it was something I would never wear.  That and there are no finisher medals.

I bet some people get jaded by getting a medal when they run many events but for me, I love them!  Only having medals for the winners of each age group is fine if the swag was awesome and it wasn’t.

A great event!  Well run, great communication, an interesting route and great volunteers!  I wish they had medals but what can you do!