25 Races – A Memorial for Anthony Davey

Know your competition. That has been my racing mantra. Having shared some 25 races with him, I therefore knew Anthony Davey well.

It seemed he was always one long step ahead. Whatever he did, I would match a year or so later. So here’s to the man, to the Gentleman, who was the inspiration for many of my best performances. He led, I followed.

To give a man honour is to mark his legacy. I do so below, with an account of our races with links to blogs and reports where I can find them. I feel this is the very least I can do.

I bid you adieu, Anthony. We shall race again. 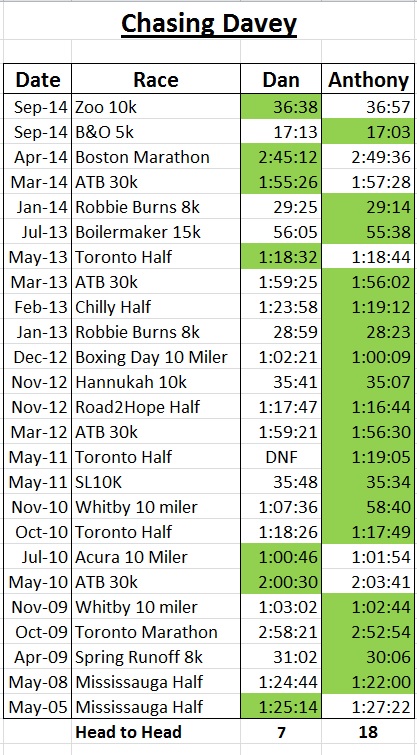 The first time we enter the same race. None is the wiser.

Anthony is a couple years older than me and in a different age group where he places 2nd  age and almost three minutes better. He is not on my radar, and I am no concern of his.

The second place overall woman puts 30 seconds on me between 16k and the finish, and shares her secret: “You just have to suck it up.”

Anthony places 2nd age again. I am still hoping and wishing with a 6th age finish.

The King of Pickering? Not! I finally crack sub-3h but am bested by another Pickering resident Mike Bosch. Mike’s pal Anthony is ahead of us both.

I know who Mr. Davey is now. His 3rd age to my 4th age, over five minutes separating our results.

I match Anthony for 14k. That is when he decides to kick. Who the hell kicks 2k from the finish? He says he just wanted to see who else had some.

After the race we have our first chat. Names on race results are one thing. Meeting the man behind them is another. Anthony introduces me to his sponsor at the time, Team Running Free. That would set my running career on an incredible new tangent. There are certain events that alter your life forever. This was one of them for me. I have Mr. Davey to thank for that!

Anthony is having a bad day. I pass him cramping up somewhere along the course. Yes, Anthony, that was me slowing to offer words of encouragement. Neither of us go sub-2h.

At 10k I pass Anthony as he melts in the un-Irish heat, and I discover his Achilles heel. I take 1st age, also besting Stronski (2nd age) who won the Whitby Marathon. Davey, who coincidentally won the Whitby Half, takes 3rd age and is a quick exit from the post-race awards party.

I cannot say for certain, but expect this setback has inspired Anthony to take his training to another level.

This was an epic battle between three master’s men in top form (Davey, MacKinnon, Tranter) rocketing down Yonge Street and the Rosedale Ravine. None would quit. Plaques and watches to Davey and MacKinnon, with Tranter just four seconds out. I doubt I will ever experience another race quite like this one.

Davey claims his revenge from Acura. Perfect Irish weather conditions help his cause.

First, I win the 10k race. Then I join the 10 miler for kicks with Anthony who is genuinely disappointed that I am not racing with him. Easy win and huge PR for Davey.

My first and only DNF. Anthony is in my sights, but no, not this! I walk off with a hammy cramp.

One of my better races in an otherwise disastrous year. It was close but Davey has my number. More like, he is sitting on my chest and won’t get off. Eight more races of this!

Another PR chasing Davey. If that is how it is to be, no complaints. Only respect.

I miss essentially the rest of the race year. Davey wonders where I am. 2012 starts my rebuild. As Davey forges into new territory, I have to revisit my own.

Gold medals and PR’s for us both. Due to an injury plagued 2011, I have lost considerable ground on Anthony.

This may be as close as I come to repeating that great Toronto Half of 2010, and it of course involves chasing Anthony.

I grab onto Davey’s coat tails and match wits for more than half the race. Anthony blows his old PR out of the water. No way I was keeping up to him.

I am fortunate not to be in his age group. 1st age results for us both, and top master for Davey! Anthony comments: “Muhahaha!”

Schooled by the master yet again. But I am getting closer.

Anthony just misses sub-60 in conditions unfit to race, and does it with almost even splits. Really? The second half is a terrible test of hill climbing and lactic perseverance through slushy shit.

The unstoppable Davey adds his name on the Grandmaster trophy. To add my name on that trophy beside his, that would be an honour.

The recently formed Black Lungs place 10 inside the top 30.

Time to mail one in. I pace a female friend to 3rd overall. Davey takes 1st age and a free dinner, on a marathon paced training run.

The fearsome Black Lungs have arrived in force! There was NO WAY I was going to place age in my group today. Even repeating my PR from Hamilton would not have been enough.

Barely sub-2h for me and a struggle at that. Davey takes 1st age and sets a PR on another marathon paced training effort leading up to Boston.

I bail on Boston (not ready for it). Anthony refers to Boston as “Mecca” and wonders why on earth I would be so foolish. I ask about his race strategy and he replies: “Balls to the wall”. That he did, for at least the first half anyway. It is hard to understand how 2:48 at Boston can be a disappointment. After the terrible terrorist attack, both Anthony and I vow to return in 2014.

Anthony’s legs are still shredded from Boston. Boston can do that to the overly ambitious. I finally can say I beat him again, but not on his best day. Hot weather is my advantage.

I ran scared the whole way. He was never more than 10 seconds behind.

The class man he was, Anthony grabs me for a finish line pic. Remember this moment, he says. I surely will. 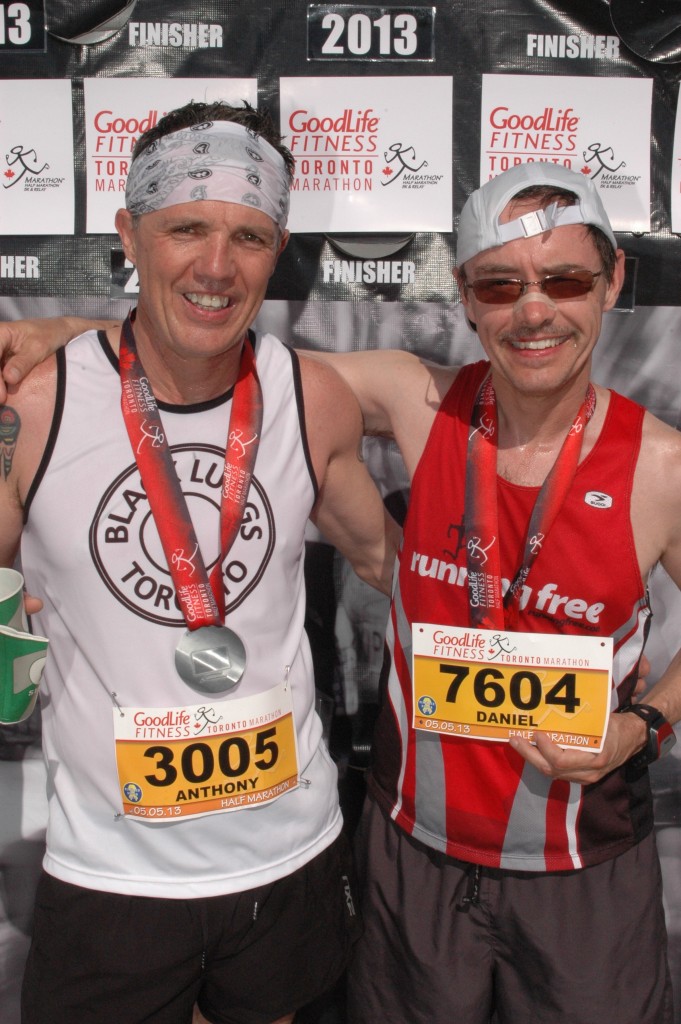 Davey starts in the corral behind me yet is ahead of me less than 100 m into the race. It was simply freaking hot but Davey did not succumb, earning master prize money.

Anthony again comments “Muhahaha” on my race report. It becomes my training mantra for Road2Hope 2013 and will give me the best marathon of my life.

The endless winter of ice and snow makes for slow training.  I may have the better marathon result, but Davey still owns everything else. I kid myself this is only a training run. Davey and his team mates on the Black Lungs are unbeatable.

Friends take the time to make you better. Others don’t care. Anthony cared.

I catch up to Anthony about 21k in. We chat. Anthony thinks his best racing days are behind him. I don’t think so!

Anthony and I return, with thousands more, to take back Boston from the terrorists. Mission accomplished. Boston Strong!

I pass Davey around the half mark. Conditions are hot, but he manages not to burn up. We both have great races and results.

The man claims his best days are behind him, yet he still has my number in the 5k.

Our last race, neither knew.

I lead, Davey follows and passes me at 2k. Davey’s knee is apparently suffering from some klutzy fall he took days before, at least that is his excuse. I catch him again at 7k and run scared the rest of the way. Davey never ever gives up, especially when I am ahead!

I leave the race knowing, hoping, that Anthony will be back for revenge. Because, when I am ready for the challenge, Davey is the man I want to be chasing.

I look back on this race now with regret. Had I known his imminent fate with cancer, I would have crossed the line with him.

This has been a cherished rivalry. I will forever miss the honour of racing with this Gentleman.

Anthony, one day I will join you and we shall race again. Until then, “Muhahaha!”