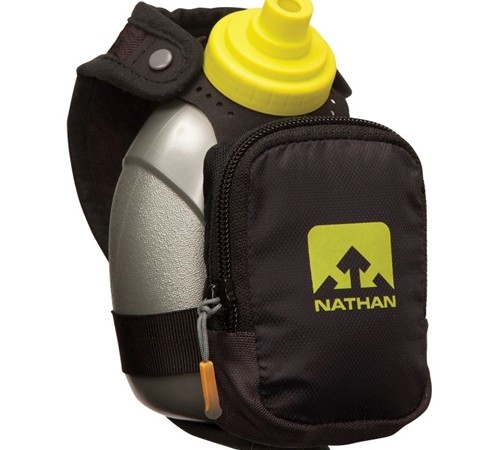 This year, I was fortunate enough to win a $75 Nathan credit through the Team RF lottery. This was a perfect opportunity to trial some of the company’s hydration accessories. For $75, I was able to purchase the Quickshot Plus handheld water bottle and the Mercury 3 hydration belt, both on sale at the Newmarket store. In this post, I will review the Quickshot Plus bottle, which was probably the greatest running investment I have made since getting a GPS watch!

To better understand if the Quickshot Plus bottle is right for you, I think it’s important that I briefly mention the type of training I do and what my hydration strategy typically is during training. In the past, when training for long distances (half marathons and marathons), my hydration strategy has consisted of either 1) leaving water/gatorade out on the course before my run, 2) running several loops and stopping at home for fuel, or 3) having a family member bring fluids out to me by car or bike. Also, I normally wouldn’t drink during runs under one hour. In other words, I carry as little as possible with me while running. Last year, while training for the Toronto Waterfront Marathon, I used a hydration belt on a few of my long runs. The belt allowed me to run more, stop less, and better simulate race conditions by refueling at times when I would be refueling during the upcoming race. I think using the belt during training was part of the reason I was able to PR during the marathon. However, I still hated wearing the belt during those runs because it was uncomfortable and caused some chafing in my back. This year, I was hopeful that the Nathan Quickshot Plus would be a good alternative to the hydration belt. Here’s what I thought of it:

The Quickshot Plus feels really comfortable as soon as you secure it to your hand. It becomes part of your hand and is easily forgotten when you start running. In fact, I am still able to put my hands on my hips when waiting at traffic lights or stopping for a breather without the bottle getting in the way. Initially, my shoulder on the side I carried the bottle was stiff after running with it. It took me a few runs to remember to relax that arm as I had never run with a handheld bottle before. When running in the summer heat, I filled the 10 oz bottle with ice and water. The bottle is not insulated (although I believe Nathan sells one) so water would usually be warm by kilometers 6-8. Also, because it is not insulated, the ice cold bottle felt very cold on my hand. Nevertheless, the comfortable fit outweighed the lack of insulation and I ended up using the bottle throughout my marathon training, even for shorter runs.

The bottle’s race cap is a great feature that allows for quick and controlled squirts of water while running, either for drinking or for pouring over my head. The cap seals very well over the bottle and it never leaked throughout my training, an issue that I’ve seen with Fuel Belt bottles. If you already use Nathan bottles but don’t have the race caps, I recommend switching to them (Nathan sells a 3-pack). The zippered pocket is the perfect size for 1-2 gels but would not fit a cell phone. For me, the 10 oz bottle was adequate for about one hour of running. I was able to plan my longer runs to have places to refill my bottle along the way. However, at times when I wasn’t able to plan for refills, I was left with the dreaded options mentioned earlier in the pre-Quickshot Plus era. Finally, the bottle and the fabric strap/casing are easily cleaned. I regularly threw the casing in the wash with my running clothes and cleaned the bottle when washing dishes. I found it somewhat difficult to take the bottle out of the casing and putting it back together. I haven’t seen the new models but based on pictures, I suspect changes may have already been made to make this process easier.

In summary, I found the Nathan Quickshot Plus to be a great investment. I hydrated better during my training because it was comfortable enough for me to bring along on most of my runs, even shorter ones. I was able to eliminate the need to wear a hydration belt on my long runs because I train in an area where I can easily find water fountains to refill the 10 oz bottle. It may not be the best option for everyone running long but I think it’s definitely a smart option for everyone running short.

View all posts by Tommy Leblanc-Beaudoin →