If you are like me, you get attached to certain races or series. The 5 Peaks Race Series has been

November 29, 2017 No Comments on MEC Race Series – Racing on the Cheap

If you’re like me, cheap and don’t want to pay a lot for your races, then the MEC Race series

This year, in honour of Canada’s 150th birthday; My family and I trekked to Ottawa, to run the Canada Army

Long overdue! I ran the ‘short’ course at the Chase the Coyote last year and was happy to be challenged to

Disclosure: I would like to thank Team Running Free for selecting me as the lottery winner for this year’s entry

On Sunday July 16th , I had the opportunity to run in the Lindsay Milk run 10k race. The Lindsay milk run has three distances, 5k,

Mississauga Half Marathon 2017 Date: Sunday, May 7, 2017 Location: Mississauga, Ontario This was the sister race to my Burlington

The Run for the Toad Trail Race Date: Saturday, September 29, 2017 Location: Paris, Ontario http://www.runforthetoad.com/home.html This is a trail

The Sticks and Stones Trail Race 2017

Date: Saturday, October 7, 2017 Location: Dundas, Ontario http://www.sticksnstonesrace.com/ I was invited to this event by a friend from my

As a lottery winner for Chase the Coyote I am thrilled to review this race! This was my 2nd trail 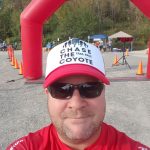 This summer’s Toronto Waterfront 10K saw the Canada Running Series team up with Lululemon to bring runners a fabulous event!