i think that i could get into this ‘using races as key workouts’ thing. as this week marked my return

meat loaf was right – two out of three ain’t bad. i’d stated my goals for this race earlier this

my friend sean has been asking/nagging/goading me for a while to try an adventure race with him.  this time around

just when you thought it was all going according to plan. that was the refrain of the day for this 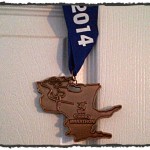 this story starts in the world of social media. as an aspiring social medialite, a couple of years ago i